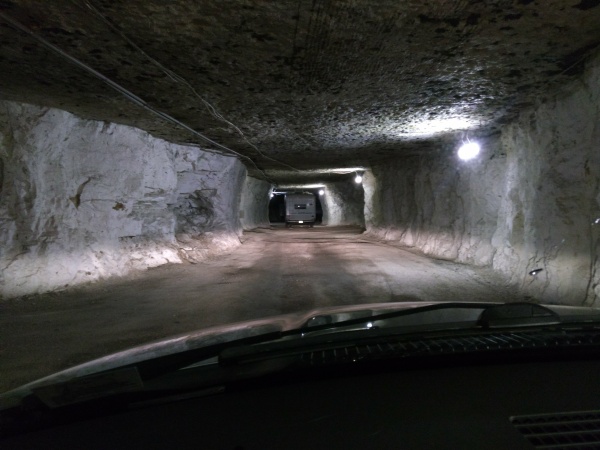 We were up early yesterday to shower and get ready to depart at 6:40 AM for our trek to Bradys Bend. With sub-freezing nighttime temperatures imminent, we were at the decision point to either have to winterize for home storage or move the Hideout to a warmer location. We opted for the latter and so we made the trip to the mine for our third winter there.

Since we had such an early departure time, I hooked the camper up the evening before. So, it was sitting there ready to hop in and go. All I had to do was plug in the power cord to the truck and turn on the battery. I had previously moved the propane 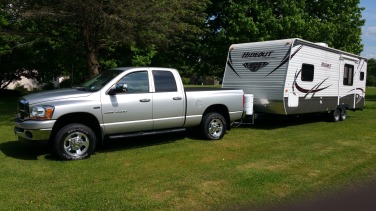 tanks into our shed because they are not allowed in the mine.

In a car, I could easily make the drive from home to Bradys Bend in a little over an hour. However, the combination of the extra 7,500 pounds in tow and the hilly, winding roads that get more challenging the further you go, makes for a drive of about an hour, thirty five minutes.

Upon arrival at the mine, the process is to first check in at the office building, where you sign the lease and pay for five months of storage. Then, when the escorts are ready, you follow a truck into the mine. When you get to the areas where the corners are tight, one of the men in the escort truck gets out and follows on foot behind the camper. His purpose is to watch the tail swing of the camper when we make the sharp corners, to give a yell if I am about to scrape the wall. Thankfully, that didn’t happen.

When we got to the location they had ready for us, we followed the direction of the two men, flashlights in hand, as they guided us back into our space. Their help is a good thing to have because of the combination of darkness and damp mirrors.

After we unhooked, the escorts guided us out of the mine and we were on our way.

We went cross-country toward Harrisville to have breakfast at Family Traditions Restaurant. They have a breakfast buffet on Saturdays and Sundays that is quite good.

And so ends our 2017 camping season. Bring on spring!